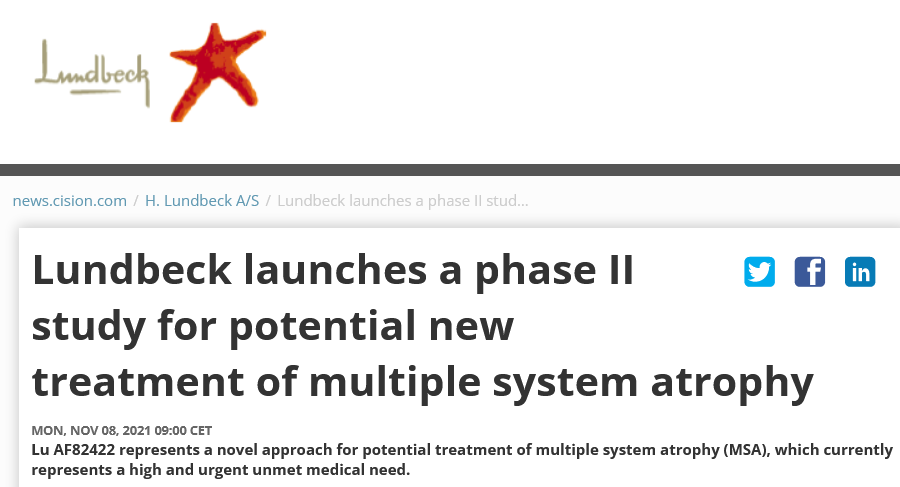 H. Lundbeck A/S (Lundbeck), announces that it has expanded its clinical-stage pipeline and is ready to initiate the AMULET study, which is designed to confirm the potential of Lu AF82422 as a treatment to slow the rate of disease progression of multiple system atrophy (MSA). MSA is a serious, rare, sporadic, and rapidly deteriorating neurodegenerative disease that gradually damages brain cells. Current therapeutic intervention is limited to symptomatic treatments, which fail to address the underlying biology of the disease and the benefits are partial and transient. Hence, effective treatments delaying the clinical course of the disease represent a significant unmet medical need for patients with MSA.

Earlier this year, Lu AF82422 was granted orphan drug designation by the European Medicines Agency (EMA), and the AMULET study has now been approved by the FDA and is ready to enroll the first patient.

Lu AF82422 is a human monoclonal antibody (mAb) targeting the toxic alpha-synuclein protein known to be a pathological hallmark of MSA. The compound is thought to work like the body’s natural immune system to clear these harmful proteins. As it targets the underlying biology of the disease, Lu AF82422 may potentially slow or stop the progression of MSA. Lu AF82422 was invented by Lundbeck and Genmab A/S under a collaborative research and license agreement between the two companies.

“We have high expectations for this project and are pleased to advance Lu AF82422 into evaluating its clinical safety, tolerability and efficacy in MSA. Lu AF82422 has the potential to be the first disease-modifying treatment to be approved for the treatment of patients with MSA. Also, we are delighted that the European Medicines Agency acknowledges the urgency to treat this fragile patient population by granting us Orphan Drug Designation. We look forward to learning more about the potential of this unique compound in the innovative AMULET study,” says Johan Luthman, Executive Vice President, Research & Development at Lundbeck.

Lu AF82422 has been demonstrated to be well-tolerated in a completed phase I single ascending dose study. The safety of Lu AF82422 will continue to be monitored in the AMULET study.

About the Amulet Study
The primary objective of the AMULET study is to evaluate the efficacy of Lu AF82422 versus placebo on disease progression in patients with MSA. The secondary objectives include evaluation of Lu AF82422 on patient’s functioning, disease severity and other aspects of MSA, as well as safety and tolerability of the drug. Lu AF82422 will be delivered as an intravenous infusion once every four weeks up to a maximum of 72 weeks. The two-arm study will randomize a total of 60 patients (40 in the Lu AF82422 group and 20 in the placebo group) from US and Japan.

About MSA
MSA is a rapidly progressing rare condition of the nervous system that causes damage to nerve cells in the brain. MSA is seriously debilitating and places a high disease burden on patients. Symptoms of MSA usually start between 55 and 60 years of age and the patients typically live for 6 to 9 years after symptom onset.

In a person with MSA, an abnormal build-up of the protein alpha-synuclein is thought to be responsible for damaging areas of the brain that control balance, movement and the body’s normal functions.

The symptoms of MSA are wide-ranging and include muscle control problems, similar to those of Parkinson’s disease. Many different functions of the body can be affected, and symptoms including urinary incontinence, frequent falling, and unintelligible speech occur within 3 years of disease onset and are accompanied by reduced capacity to live independently. Death is often due to respiratory problems. Although there are many different possible symptoms of MSA, not everyone who is affected will experience all of them. There is currently no cure for MSA and no available treatment to slow its progression.

💜 For Research Updates on Lundbeck’s Study & Get Connected with Lundbeck, Register on Defeat MSA Research Registry:
https://defeatmsa.org/research-registry/
← Alterity Announces Expanded ATH434 Phase 2 Program GIVE THE GIFT OF AWARENESS THIS HOLIDAY! →

Congratulations to MODAG! On behalf of MSA/AMS patients around the world, we are thankful for your efforts! 💜....